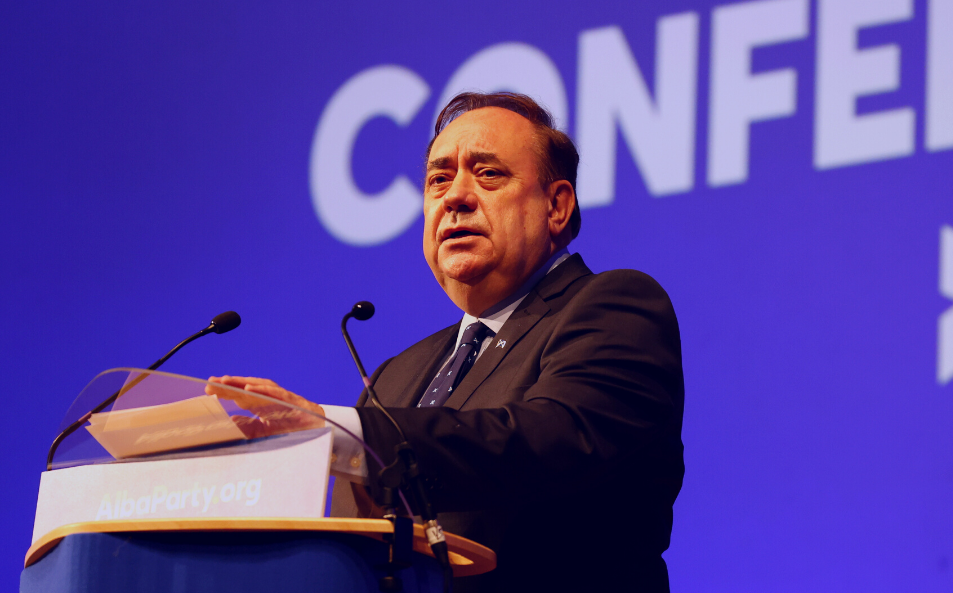 The following article from Party Leader, Alex Salmond, was printed in The National on Tuesday March 1st. It is a rejoinder to a Reuben Duffy of the “Constitution Society” who had attacked the statements on Ukraine of Neale Hanvey MP in misleading terms.

Why, I wonder, does Reuben Duffy (National, 26th February) of the Constitution Society, find ALBA’s position on the war in Ukraine so difficult to understand when it aligns exactly with the traditions of the national movement in Scotland for over half a century.

Our movement has opposed all illegal wars, regardless of the initiator. It has at times not been popular or convenient but it has always been the right thing to do. Thus ALBA’s leader in the Commons Neale Hanvey MP expressed the Party’s condemnation of the Russian invasion of Ukraine while expressing the urgency of an early peaceful settlement. On both counts that is the right thing to do when people - Ukrainian civilians, soldiers and Russian soldiers - are dying.

The wrong thing to do is to engage in puerile whataboutery of how the coffers of the Tory Party have been filled with oligarch money, of how Labour MPs were forced to withdraw a motion criticising NATO, or how the SNP now sound more neo-con than the neo-cons or, for that matter, Reuben Duffy’s clumsy attempt at a hatchet job on ALBA.

Such might be the nature of ya-boo politics and in normal times, fair enough. However, even by the standards of Westminster, it reached an extraordinary level last Wednesday, when European war and peace hung in the balance but the dominating issue of Prime Minister’s Questions, was my political chat show broadcast on RT. For the avoidance of doubt RT is an Ofcom regulated station and has never once interfered in an independently produced programme from a Scottish company. Neither I nor my co-presenter Tasmina Ahmed-Sheikh or any of our guests are responsible for anything but the programmes we make or whether the views espoused therein are balanced. The essential silliness of the Liberal Democrats was exposed when they ended up attacking Sir Vince Cable for exercising his right of free speech, and appearing on the programme last week. Now that I have suspended the Show in this time of conflict, it might encourage politicians to seriously address the overwhelming priority of how we limit war and attempt to reclaim the peace.

It won’t be done by the sanctions announced to date. They did not deter and they won’t stop. The sanctions on individuals are far too late to be effective, and the City of London has had an insatiable appetite for recycling dirty money. That doesn’t mean these belated measures shouldn’t be taken, just that they won’t stop the war. Specific sanctions take time to work while the now muted general suspension of all Russian finance and trade, through SWIFT, including energy, might be more telling but could also turn the west’s cost of living crisis into runaway inflation and provoke food shortages in the developing world. For sanctions to really work, you have to plan to hit the intended target which should not be your own foot.

If there has been any resilience planning at all, the UK should be in a position to deploy substantial initiatives such as an emergency increase in gas production from the North Sea, something which Neale Hanvey called for last week, but which the SNP Government wish to abandon. Even the most obvious action of a “big oil” windfall tax to meaningfully help with peoples’ sky high energy bills is still opposed by the Westminster Government. Right now in London, there doesn’t even seem to be a willingness to open the doors to Ukrainian refugees.

Banning RT from the screens would be supremely counterproductive. One of the very few real hopes of stopping this conflict is the pressure of public opinion within Russia itself. Reciprocal bans on broadcasters are hardly going to assist in getting that message out to the Russian in the street, although if they were wise, BBC World would follow the well-resourced and balanced reporting of Al Jazeera. It is much more effective.

Mr Duffy claims to have found a fatal flaw in ALBA’s arguments when Neale Hanvey condemned the Russian invasion and called for diplomacy based on Ukraine’s independence, territorial integrity but addressing Russia’s security concerns. Neale at no stage said, as claimed by Duffy, that Ukrainian independence had to be “balanced” against Russian security concerns. If Duffy had a decent argument then he wouldn’t have to make things up.

In calling for Russia’s security interests to be addressed, Neale was following President Macron’s point, that “there is no security for Europeans if there is no security for Russia”. When Jack Matlock, Ronald Reagan’s ambassador to Moscow, confirmed the embarrassing fact of the range of commitments given, and then broken, in the 1990s on no eastward expansion of NATO, it was hardly reported in the UK. This issue however has been well ventilated in Germany. None of that justifies this illegal invasion but it is certainly relevant to how we might hope to establish an early peace.

Mr Duffy claims by doing so, we in ALBA are somehow recanting on the right of peoples to self-determination that an independent Scotland should have the right to join any military or geopolitical alliance we chose, without Scotland being dismembered. Quite so, but it is the reverse of what Neale Hanvey said.

In any event, no Scottish politician, to my knowledge, has ever advocated membership of the Russian-led Collective Security Treaty Organisation (CSTO) still less contemplated positioning its nuclear missiles on the English border. No doubt the Constitution Society with its establishment board comprising Lord Foulkes et al, would uphold our sovereign right to do so, but I suspect that even Mr Duffy’s earnest support would not keep us sleeping any safer in our beds.

I didn’t fully understand Mr Duffy’s historical allusions to Edward Balliol. The Balliols’ problem (father and son) as wannabe Kings of Scots, was that they were liegemen to the Plantagenets. The modern day equivalent of Edward III would be Boris Johnson. But it is not ALBA who are the Scottish nationalists in lockstep with Johnson on this and other issues. Remember, this is the Prime Minister who dismissed a Labour MP last Thursday, saying that the time for negotiation was over. In war the time for negotiation should never be over until it is stopped. Wars are much easier to start than to end, the human suffering immediate, and the risk of escalation ever present. Instead, apparently, we are just going to arm the Ukrainians to do the fighting and the dying.

In a recent paper for the Constitution Society, Mr Duffy advocated a new constitutional settlement, where Scotland would have a say in foreign policy but stay within the United Kingdom. He has the perfect right to do so, however far-fetched his hope that Westminster would agree. He wrote that my second term of office as First Minister “coincided with the 2014 independence referendum”. Goodness, what very lucky chance it was for me, that a referendum just happened to come along and didn’t have to be constantly put off because of an international financial crises or wars in Europe!
Send to your contacts
Share