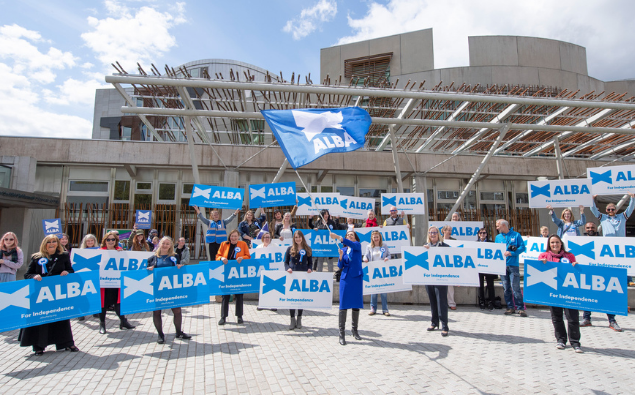 ALBA Party have sent their support to a large women’s rally that has been held outside the Scottish Parliament.

Many ALBA members attended today’s event to express concerns of the Government’s controversial reforms to the Gender Recognition Act.

Despite widespread concerns surrounding the proposals, the Scottish Government wishes to introduce a system of gender “Self-ID” which removes the need for medical safeguarding, which many fear will allow women's spaces and services to be accessed by men. Any man can claim to be a woman and will then have access to women's spaces and services without the need for a medical diagnosis of gender dysphoria.

ALBA Party says that Self-ID is a safeguarding issue and a loophole that can be exploited by those intent on doing harm to women and that this is a concern the Government have dismissed as “not valid”.

“ALBA is determined that the sex-based protections as set out in the Equality Act 2010 are preserved and fully implemented in Scotland.

“ ALBA Party stands with women’s rights campaigners. ALBA will protect women’s rights, not at the expense of others, but to safeguard women and girls.

“ These rights were long fought for and are absolutely necessary.

“ ALBA applauds groups such as For Women Scotland and everyone who attended today's rally.

“ ALBA Party calls upon the Scottish Government to remove the Self-ID provision from its controversial reforms of the Gender Recognition Act and asks every MSP to examine their conscience and stand against this attack on the rights of women and girls.”