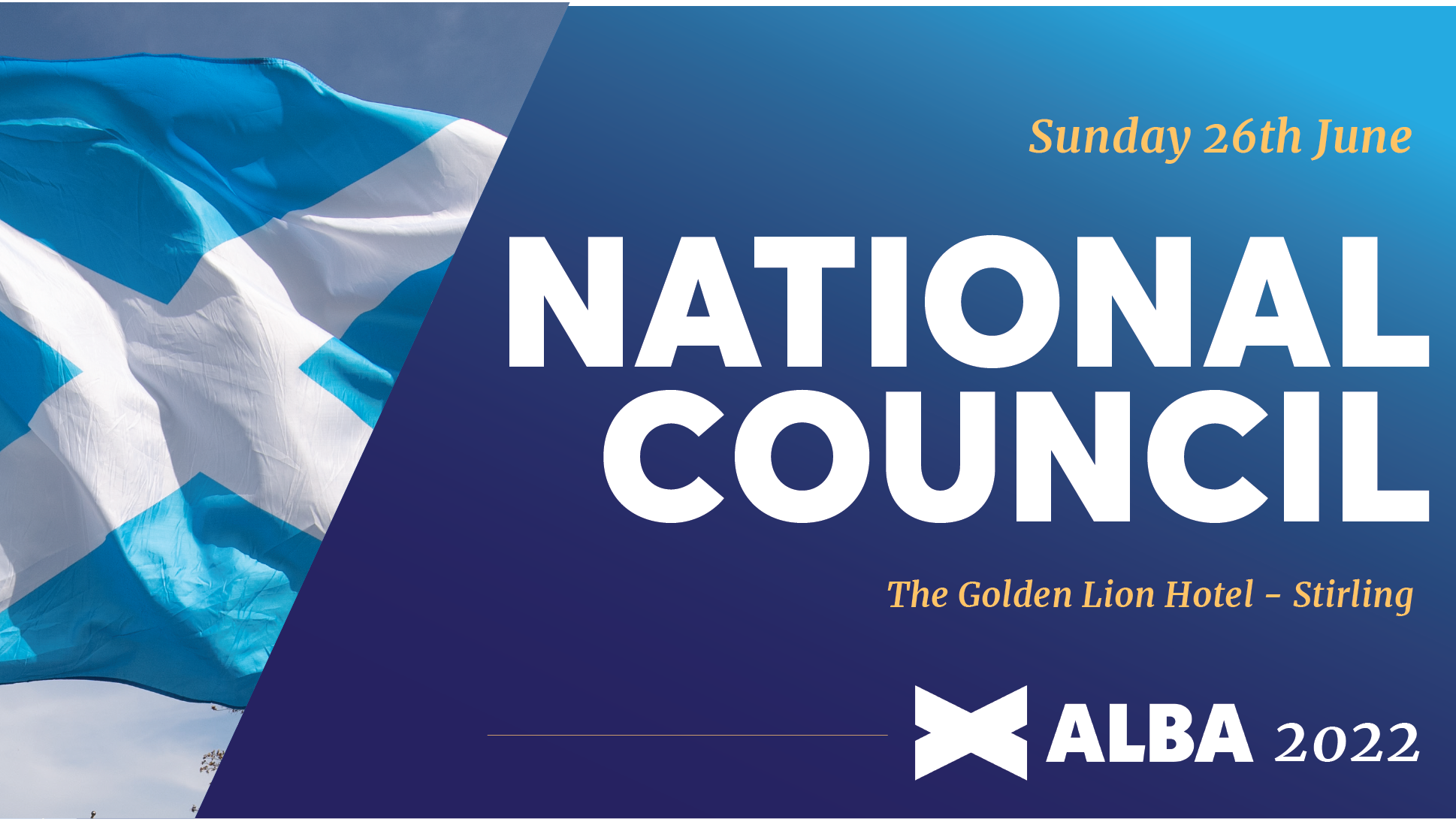 National Council welcomes that the First Minister has recently launched the Scottish Government’s new Scottish independence campaign and that the Constitutional Secretary has confirmed that the referendum will be held in the month of October in 2023.

Council notes that the energy of the independence debate of 2014 came from the setting of the date of the 18th September.

The Yes Campaign in 2014 brought together a coalition open to all progressive parties in support of Scotland’s independence, as well as a broad church of Civic Scotland, Trade Unionists, Businesses and members of the public.

Success in the promised referendum of 2023 will require all of Scotland’s pro independence parties and those in support of Scottish independence to unite behind our common goal of independence.

2. Defence & Security in an independent Scotland

National Council notes that Alba Party is just over one year old and welcomes that we have already produced a series of policy positions and papers on a range of issues such as the Economy, the Cost of Living Crisis and Energy.

National Council notes that the geopolitical issues of today have considerably changed since Scotland’s first independence referendum in 2014.

National Council believes that in the run up to the independence referendum in October 2023 it is important that Alba Party has a robust Defence and Security policy.

That the following National Assemblies are held to better inform party members in the run up to Annual Conference:

That a motion should thereinafter be brought to the party’s Annual Conference to agree the Alba Party Policy in regards to Defence and Security.

Council welcomes the first edition of the WEE ALBA BOOK and notes its success in generating substantial interest in the independence cause in meetings across Scotland and further endorses the plans for a summer schedule of campaigning.

Council looks forward to a new improved second edition of the WAB being produced for the autumn, as the independence campaign gathers momentum.

a) On 25th april 2022, as the result of inadequate legal aid funding, criminal practitioners across scotland voted to refuse all new instructions in summary cases involving an alleged contravention of s1 Domestic Abuse (Scotland) Act 2018. In these cases, accused persons cannot represent themselves. This necessary safeguard prevents victims being cross examined by abusers. Legal aid firms cannot absorb the additional time and expense of acting in these cases without adequate remuneration.

b) The fixed fee for summary criminal legal aid work set in 1999 was based on an average case cost from 1992. The scope of the fixed fee has since been expanded to include additional work.

In 1999, a solicitor for a client under the age of 21 on remand could get an addiConal fee of £100. That fee no longer exists despite the complexities of defending very young people who have often suffered adverse childhood experiences. In addition, for work prior to a not guilty plea and the grant of summary criminal legal aid solicitors were able to grant Advice and Assistance. This was subsumed into the summary criminal legal aid fee resulting in a reduction in the overall fee.

c) A legal aid lawyer will be paid £56.79 to conduct a JusCce of the Peace Court trial. A witness attending court claims £50 in expenses plus a lunch allowance, thereby receiving almost the same for simply attending court as a qualified and skilled court practitioner is paid for conducting a trial.

d) In civil actions, such as divorce or child welfare matters, the fixed fee covers blocks of work where often complex tasks extract no payment at all. This is especially stark as the result of remote working where written submissions on which a Sheriff may decide a case are not chargeable if followed up by a virtual hearing. In family matters a solicitor is required to engage with a client extensively, usually with a view to settlement of outstanding issues. Although this work is designed to avoid matters proceeding to proof and with a view to settlement none of this work is remunerated.

Civil legal aid work is so poorly remunerated that in many parts of Scotland there are no or only a handful of practitioners offering this service; those who do tend to be at the senior end of the profession, nearing retirement. In effect, private clients subsidise those who are funded by legal aid.

e) Significant numbers of criminal defence solicitors and civil practitioners have been lost to other public bodies namely the Crown Office and Procurator Fiscal Service (COPFS), the Scottish Children’s Reporter Administration and the Scottish Child Abuse Inquiry. Legal Aid firms cannot compete with the salaries offered by these organisations which are regularly as much as double those able to be paid in private practice.

The Scottish Government have chosen to fund pay parity for Procurator Fiscal Deputes and other Government lawyers and the recruitment of more prosecutors to deal with the COVID backlog. Some COPFS staff have seen pay rises of as much as 24% since March 2021.

f) If the legal aid sector is not properly funded, there will be insufficient practitioners to cover a mounting backlog of cases. When the work required outweighs the available funding solicitors cannot accept instructions. It is vital for the justice process that skilled, experienced practitioners are available to act in serious, complex cases. In criminal defence work the criminal bar is ageing and many approaching retirement. Problems in recruitment mean that the criminal bar will be significantly reduced over the next few years with few younger practitioners to follow on.

A number of faculties withdrew from the court duty scheme at the beginning of 2022. The Scottish Government has failed to provide duty solicitors to cover bail undertaking cases in several jurisdictions. Accused persons are accordingly oRen unrepresented and cases are adjourned unnecessarily. The Scottish Government need to fund legal aid lawyers to meet the state’s obligation to provide representation at first calling.

Council notes that following on from The Housing Emergency resolution passing at the Alba Party spring conference it is now time that the party further strengthen and detail our policy on how best to address the crisis Scotland continues to find ourselves in.

Council recognises the actions being taken in other areas throughout the UK, with Whitby and Lake District leading the way with much needed radical policies on home ownerships as well as organisations within Scotland such as Living Rent calling for action, with one call being a Short Term Lets Control Area consultation, being carried out by Local Authorities to open discussion on best ways to address issues in different areas.

Council calls for a strengthening of the housing policy with a 2 step process:

Supports the Wyndford community in Glasgow in its campaign for Energy Justice, and in its aim of achieving local energy-autonomy, and encourages all other communities to consider similar action.

Asks power company SSE to open negotiations with Wyndford Residents Union over the prices being charged for energy currently generated by the local publicly-owned infrastructure.

Notes that the infrastructure is essentially publicly-owned through Glasgow Housing Association, and observes that the role of profit-taking third-party energy companies in the operating of these public energy schemes may be detrimental to their intended public benefit.

Supports the creation of a publicly-owned national energy company, aimed at providing a service to all communities.

ALBA is shocked by the lack of urgency shown by the Scottish Government in addressing mental health care especially the mental health needs of our children.

ALBA condemns the poor management of the CAMHS waiting list and the postcode lottery of its nature; notes that in some parts of Scotland there are delays of up to 36 months for the first assessment of a child. Those delays cause untold damage to quality of life and hamper the potential of children and families so affected. ALBA notes that often CAMHS professionals are engaged in conducting routine reviews and assessments which others less qualified might undertake more efficiently at less cost.
ALBA highlights that lengthy waiting lists also lead to the forfeiture by children and families of vital income from Child Disability payments worth £24.45 per week, £1,271.40 low rate per year or £3,814,20 over the 36 month waiting list, £61.85 per week, £3,202.16 middle rate per year or £9606.48 over the 36 month wait, and £92.40 per week, £4,804.80 high rate per year or £14,414.40 over the 36 month wait.
ALBA believes this inexcusable direct negative impact on Scottish child poverty has no place in Scotland 2022.
To ensure the service nationwide is fit for purpose in the run up to an independence referendum in October 2023, ALBA believes that an urgent managed solution to alleviate pressure on CAMHS will be the swift, co-ordinated introduction of bespoke mental health community nursing teams into forums including schools, homes, GP practices and community hubs; the remit of those teams dealing with reviews of existing patients can comprise standard measuring such as taking weight, height, blood pressure and a comprehensive questionnaire of needs and experiences. This will release CAMHS teams to focus and prioritise new referrals in an efficient and patient friendly manner and will enable CAMHS professionals to utilise their skills to Scotland’s best advantage. ALBA moves the Scottish Government to fund and require the Scottish NHS to do so forthwith.

National Council agrees that ALBA will establish (following a National Assembly) a working group for Transportation matters to implement the following:

That this Council gives its wholehearted support to the rail workers currently engaged in industrial action in defiance of Network Rail’s pay offer which amounts to a real terms pay cut, commends the RMT for defending its members in opposing this direct attack on the terms and conditions of its members and in opposing compulsory redundancies across the rail network, believes that this action has been unavoidable and only taken as a last resort, due to the intransigence of Network Rail whose senior managers continue to pocket eye watering pay and bonuses, while the employees on whom the success of the railways depends, are facing an unprecedented cost of living crisis and salutes the RMT for continuing to campaign for safety on the railways and for leading the fightback against Tory austerity and the ideological battle being waged by the UK Tory Government to  break the power of trade unions to represent their members.

That National Council condemns in the strongest terms the decision of Home Secretary Priti Patel to sign the extradition order for Julian Assange to be sent to the US for trial.

As Julian Assange is a journalist we also call on the United States to live up to the values embedded in their Constitution and the Bill of Rights and end the prosecution and persecution of Julian Assange.