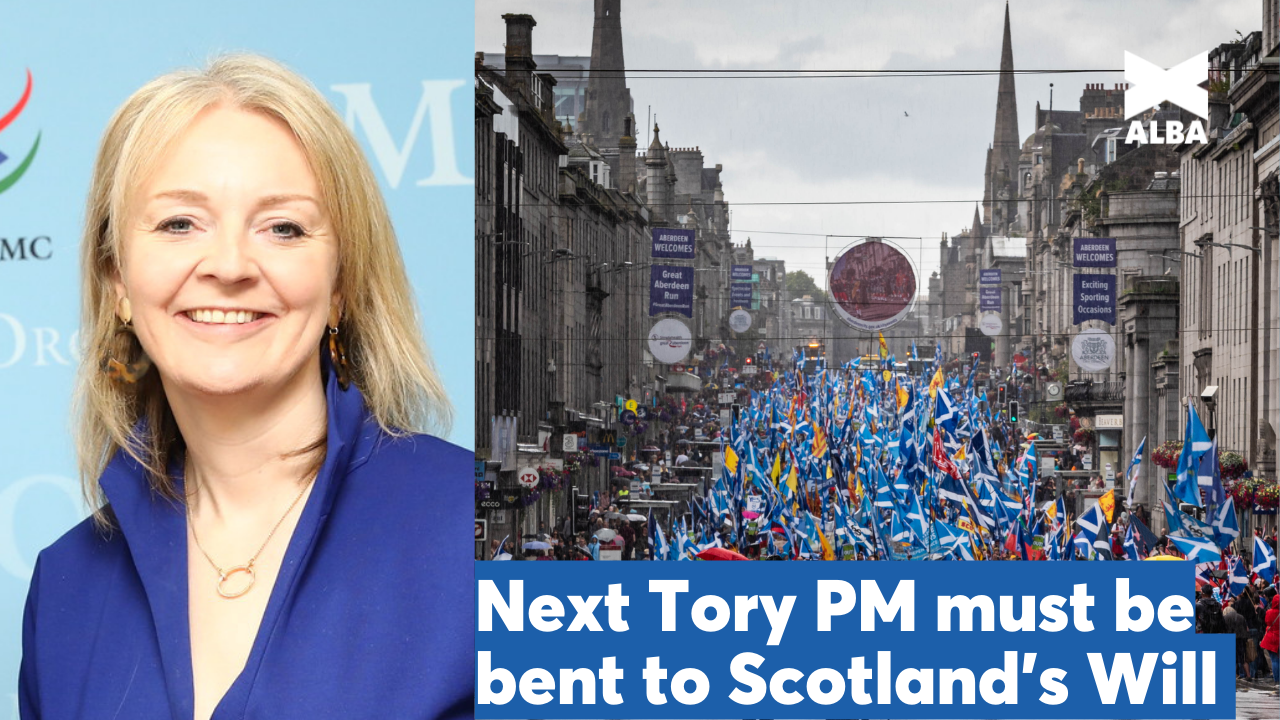 ALBA PARTY has told Tory Leadership front runner Liz Truss that she will be unsuccessful in her attempts to follow in her predecessors footsteps of vetoing Scotland’s right to self-determination.

Former First Minister Alex Salmond’s Party have stated that they will not accept a “Tory Veto” on Scottish independence.

In an interview with the Sunday Telegraph Liz Truss has insisted she will not allow a second referendum on independence to take place if she becomes the next prime minister.

The favourite to replace Boris Johnson as the next Prime Minister claimed she would "do what is necessary and right to defend our Union" in comments that have been attacked by Alba Party’s General Secretary.

Chris McEleny says that the next Tory Prime Minister will not get off as easy as their predecessors in blocking Scotland’s right to self determination as his party and the wider independence movement will not accept another veto over democracy in Scotland.

“ Liz Truss, or Rishi Sunak, will be the latest in a line of Tory Prime Ministers that think they can strengthen their Union by refusing to accept the democratic will of the Scottish people. In the months to come, it will not be the Scottish independence movement that is bent to the decrees of Downing Street, it will be Westminster that is bent to the will of the Scottish people. The next Prime Minister’s attempt to Veto our right to self determination will fail.

“ Alba Party have been setting the example for others to follow in our Parliamentary interventions, we are taking the case for Scotland’s democratic right to self determination to the international community and we are making the case for independence in towns and cities across Scotland in public meetings every week.

“ Unfortunately for Liz Truss, for success, attitude is equally as important as ability and if she is the next Tory Prime Minister she will be quickly reminded that in Scotland we have the will to do, the soul to dare and the people to regain our independence. “

"Scottish Nationalists accepted that their referendum was a once-in-a-generation opportunity, and I will hold them to that," she told the

"I will work to strengthen our whole Union. As prime minister, I will do what is necessary and right to defend our Union, just as I have already done on the Northern Ireland Protocol."

"The SNP lost the 2014 referendum and Nicola Sturgeon is now leading a campaign of deception to steamroller the UK and break up the Union.

"But I am completely clear that there will be no second Scottish independence referendum on my watch.

"The Scottish Independence Referendum Bill isn't legal and it will be invalidated if passed by the Scottish Parliament. When Westminster devolved power to Scotland, it did not include the ability to hold valid referenda to break up the Union.

"Any Scotland independence referendum would need to be authorised by the Westminster Parliament. If I become prime minister, I would not grant that authority."