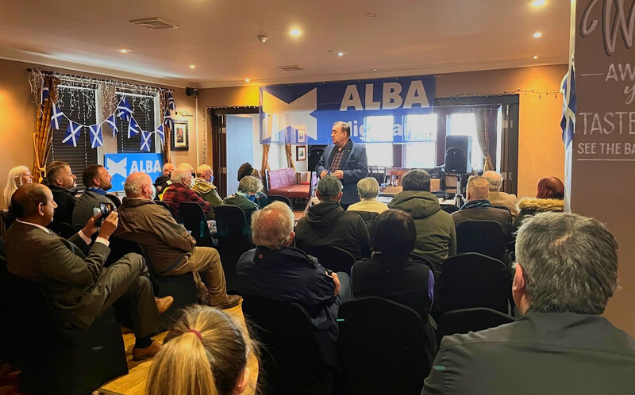 Former First Minister, Alex Salmond, will today call for Scotland to unlock its massive energy potential and end the scourge of fuel poverty in Scotland through Independence.Speaking in Falkirk at the latest “Wee ALBA Book” roadshow event Mr Salmond will state:

“As our people face the worst cost of living crisis in living memory and an average energy price hike of £700 per household Scotland needs Independence to unlock our massive energy potential and to lift the one in three of all households out of fuel poverty. No family should face the indignity of having to choose to heat their home or feed their family and yet sadly that is the reality for too many of our fellow Scots.

“It is high time that Scots families benefited from Scotland’s massive energy resources.

“Scotland has an abundance of energy sources with one quarter of Europe’s offshore wind capacity.  The Berwick field alone will produce enough energy to power every Scottish household but without Independence and a proper energy strategy we will continue to see manufacturing jobs sent abroad, Scotland’s energy cabled south and no revenues for Scotland. That cannot be allowed to continue and with Independence it won’t.

“Independence is the key to unlocking Scotland’s massive energy potential. With full control of our own energy resources we can maximise the jobs, both offshore and onshore and across the supply chain in the new clean and green energy sources of the future and we can make that energy affordable so that no family in Scotland has to live in fuel poverty.

“Make no mistake ALBA is calling time on poor fuel Scots in Energy rich Scotland.  With Independence we will chart a better and a brighter course.”

Mr Salmond is in Falkirk to launch the “Wee ALBA Book” – the new case for Independence, at a meeting at the Laurieston Bowling Club at 7.00 pm. Mr Salmond will be joined by ALBA council candidates Zohaib Arshad (Falkirk North), Scott Fallon (Lower Braes ward) and Colin Todd (Upper Braes ward).

“Having Alex Salmond in Falkirk is a massive boost to ALBA’s council campaign. The World has moved on since 2014 and so must Scotland.  The ‘Wee ALBA Book’ explains with facts and evidence the new case for Independence.  Events such as tonight’s ‘Q & A with Alex Salmond’ offers hope to the people of Falkirk and Scotland that life can be better and that we have the talent, the resources and the vision to build a new and better country.”