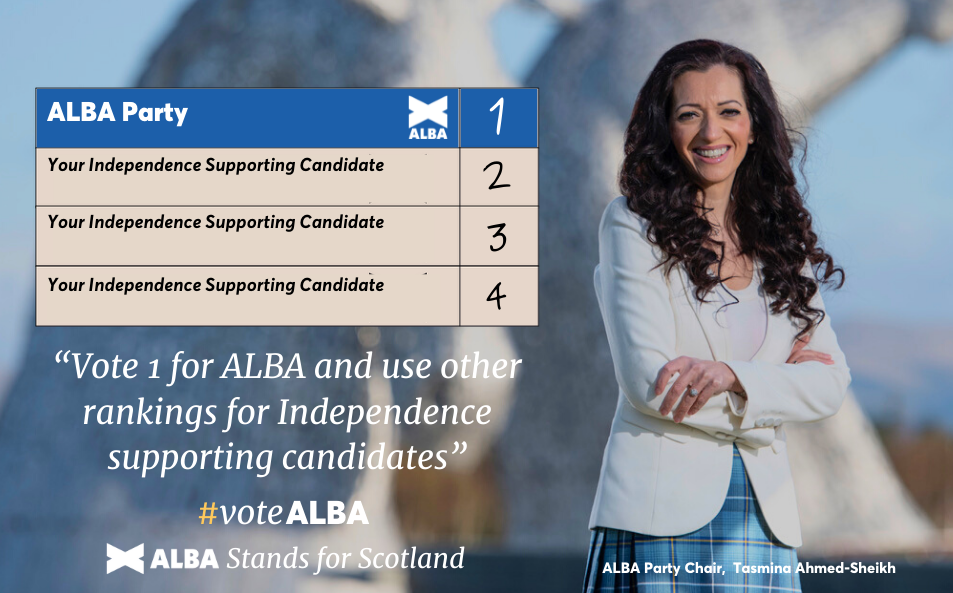 ALBA Party Chair, Tasmina Ahmed-Sheikh OBE, has issued the Party advice on voting in the local elections and called on all pro-independence voters to back fellow independence supporting candidates with all their preference votes.

Speaking after an ALBA Executive decision on the issue she said;

“ ALBA will always put independence front and centre of our campaigning.

“The suggestion from the SNP hierarchy, that voters should only vote for their party “and no other” is just plain daft and completely counterproductive. It would result in more unionists elected at the expense of other Independence supporting candidates. That is not the way to ensure the maximum number of Independence supporting candidates are elected under a Single Transferable Vote (STV) system.

“An Independence majority, in as many councils as possible, could be of key importance in implementing an Independence referendum or other electoral test. It would be folly to leave the field open to unionists, and the SNP by itself are unlikely to have a majority in any of Scotland’s 32 councils. Thus it is better for Independence supporters to work together.

“ALBA is the Independence priority party and we need Independence majorities in Councils to help deliver Independence. This positive and constructive approach will ensure that we do just that.”